I figured I should maybe put together a page for my running list-o-goals (in addition to writing posts about them), so here it is. 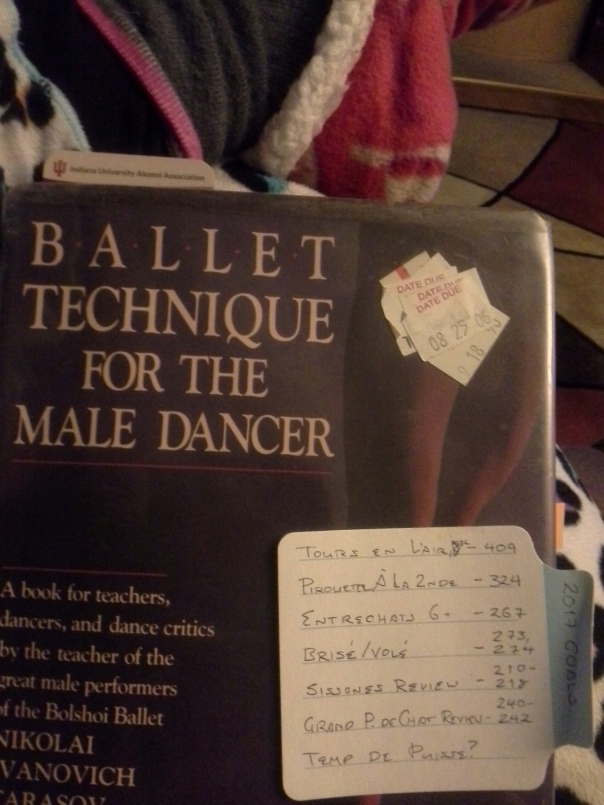 Where to find some of 2017’s goals in Tarasov’s Ballet Technique for the Male Dancer. Also, my rainbow leopard lounge w lounge pants with grey-and-pink socks and red slipper-feets that don’t go.

Barre Problems I Need To Solve

+This is for BW because BW is the person who made me understand it in the first place. I totally failed to really learn this as a kid. I just kinda faked my way through.
++These are basics, obvs, but they’re sort of advanced-mode basics. BW knows I have the capacity for 180-degree turnout and a really high passe and expects me to use them.
+++BW has giant thighs and knees just like I do, so those don’t fly as an excuse with him. Besides, life is easier when your sus-sous is nice and tight. Which just sounds … kinda inappropriate, really.
++++Honestly, I really hate chainês, but I hate them because I’m far worse at them than I should be. When I do them, BW just looks … I dunno, dejected. Especially since they usually follow piqué turns, which I do LIKE A BOSS.

Eventually I suppose I should make a list of the skills that I’ve legitimately nailed down. Then, when I have one of those days on which I’m like:

…I’ll be able to take a look at it and be like, “Yeah, actually…? That might not really be true.”