As you may know, petit allegro is not my forté.

As such, I ask all kinds of super-technical questions, like:

Fortunately, LAA’s class is small enough that she’s had a chance to really analyze my (admittedly-wack) petit allegro zizzone technique, and last night she gave me two incredibly helpful bits of advice:

So let’s revisit a screencap of me doing sissones: 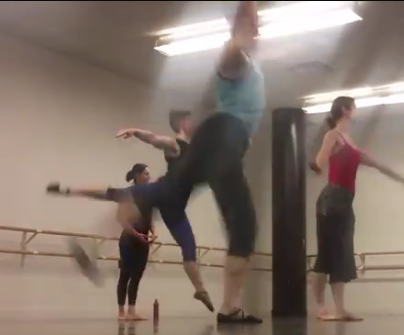 I’m the one with no feet on the ground.

This is me landing a sissone[1]. Technically, this was a medium allegro combination, but it was still wildly unnecessary for me to put that much elevation into that jump (and every single other jump in that combination).

You can see that my working leg is up there (and turned out and pointed and effing winged, holy hell).

What you can’t see is that I did this entire sissone with very little lateral travel relative to the height of the jump.

You can probably calculate the apex height of the jump with some degree of accuracy. That should give you an idea of why I’m always and forever behind when tasked with sissones in settings other than grand allegro (ideally at “men’s tempo,” which tends to be slow in order to allow for lots of elevation and ballon).

I’ve probably been doing petit allegro sissones this way for quite a while: I think, “Make it smaller,” and respond by making it not go anywhere but UP.

If you tone down your elevation and allow for a little lateral travel, your petit allegro sissone tends to become the light, lovely little spring that it’s supposed to be, and you don’t get behind the music and find yourself receiving epic side-eye from the poor schmuck attempting to dance next to you.

When I approach them this way, I can make my petit allegro sissones small and light enough to practice them in my kitchen without fear of whacking my feet or shins on things (my kitchen is tiny; the struggle is real). Coincidentally, that also means they’re quick enough to use in those horrible, fast petit allegro combinations universally despised[2] by those of us who are built for grand allegro.

One more thing: if your hips are ridiculously flexible like mine are, you’ll also want to think about opening  the working leg straight to the side or even a little ahead.

The flexibility of my hips lets me put my legs kind a quite far back in a turned-out second, which can make closing back to 5th to prepare for the next jump really slow and do weird things to the path of the sissone, which should be diagonal.

Coincidentally, I have to think about the same thing when doing grand pirouettes: keep the working leg engaged a few degrees forward of dead-to-the-side, or things become unwieldy because physics.

Posted on 2017/06/29, in balllet, steps, technical notes, uggghhh...technique and tagged bigger is not always better, petit allegro, petit allegro: the struggle is real, sissone, tone down the up. Bookmark the permalink. 2 Comments.