I was maybe seven when I first learned how to sissone.

I assume that I learned what to do with my arms, because frankly my childhood ballet teacher was not about to let you get away with not learning the arms at all. I might not have regarded them as particularly important, but that didn’t mean I could entirely weasel out of using them, either.

Regardless, I’ve effectively been doing sissones off and on for, like, basically my entire life.

…And yet, I persist in forgetting what the heck to do with my arms—by which I mean, really, basically everything above hip level when doing those sproingy little petit allegro sissones.

Anyway, today’s petit allegro was all about the sissones. Like:

So I sucked it up and queried the BG, who said, “Just look at your foot–like, you’re showing off your foot, especially if you’ve got those crazy ABT feet like you do. It’s like, ‘Look, a foot!'” 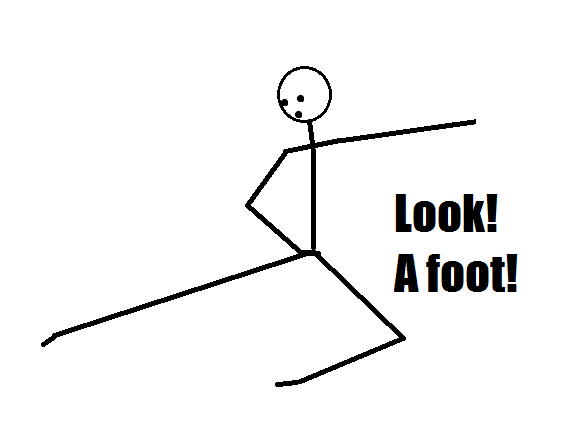 Here’s a highly-accurate technical diagram to help you out.

You’ll notice that the arms are in a configuration that is effectively the opposite of the one you use with jeté: if you brush your right foot out, your right arm will be in first (or, potentially, even en bas) while your left arm will be in something like second allongé.

This means that your body inclines slightly towards your working (in this case, right) leg, which basically gets you out of your own way, which in turn allows you to execute the choreography faster.

You guys, so much of petit allegro is basically just getting the heck out of your own way.

The other thing that this particular port de bras accomplishes is to sustain the element of surprise that makes sissone such a delightful step[1, 2].

One hopes that one will also create better-looking lines than my poor stick figure there. Ironically, stick figures aren’t always great at lines, even though they’re literally made of lines.

Also, I’mma have to admit that I interfered with my stick figure’s lines by being too lazy to draw him with any incline through the body (his shoulder’s also failing to épaule correctly). So, yeah. My bad, Danseur de Bâton.

Anyway, the long and short of it is that, for your garden-variety petit allegro sissone, the standard port de bras counterbalances your lower body.

And if you’re having trouble remembering how to achieve that effect, all you have to do is think, “Look! A Foot!”

A Note on Sissone Simple
Sissone simple has been a source of confusion to more than one dancer. It helps if you think of it not in the most frequently-used sense of the word “simple” (as in, easy: “It’s simples, silly!”), but in a more technical sense: like a simplex versus a complex.

All sissones are jumps from two feet to one foot. This variant is simple in the sense that it’s essentially a single piece: you spring off of two feet and bring whichever leg is the working leg to coupé, and you leave it there as you land on the other foot. You see it quite a lot in the Bournonville style.

Compare this with your garden-variety sissone (ouvert or firmé), in which you either plié and simultaneously brush one leg out whilst springing off the other or a spring off two feet through a soubresaut, then open one leg straight out (this one shows up in most versions of Albrecht’s variation).