← Reflections On Almost Half A Season
Ballet Lessons: Stay Together →

I’m still stunned by how different this year has been compared to last year. When she launched class this morning A said, “Last studio Saturday guys, can you believe it?”

And, of course, it got me thinking.

By this time last year, the season already felt like an interminable battle; a kind of bitter survival slog.

I did my best to stay positive and keep that to myself, but it was hard. I was lonely and anxious and felt like an outsider and like maybe I shouldn’t be trying to do what I was trying to do.

And here we are this year, and it’s basically a full 180° difference.

I’m still pretty sure I’m the worst dancer in this company, but I’m okay with that.

And part of that is that this year I’m the worst dancer in the company, instead of this weird anxious appendage. Instead of being a stressed out and dejected assemblage of people, we’re a unit in a way that I don’t think we were last year at all, and it’s such a cool feeling to be part of that.

The thing about being a professional dancer is that you never get to say to the audience, “I’m sorry, I’m usually better than this; I’m having a really bad day.”

Your worst day still has to be good enough.

So when your AD casts a show, she’s thinking about that, and trying to put you in a role that’ll play to your strengths even on your worst bad day.

And when you’re taking class every day, you’re working on making your worst bad day better and better and better.My worst bad days probably aren’t really 100% “ready for prime time,” but they’re getting better. Part of it is just improving technique, of course—but some of it’s also leaning how to laugh it off when I do something utterly bone-headed, and to make my mistakes look good (or, at any rate, less bad).

And that’s all down to confidence. As a dancer, you live and die by the belief that you have the right to be standing where you are, whether in the studio or on the stage.

Or, well … Okay, sometimes you really have to fake it (laughing at yourself helps).

When I’m having a rough time remembering combinations or whatever, I try to remember what L’Ancien says to me whenever he sees me retreating into myself:

“Remember: you are a prince.”

He always says are.You are a prince.

Which is to say, it’s there, inside you. You evoke something that already is.

I think we’ve all seen random people—some lady on the bus with four kids and her hair up in a messy Mom-bun; some old gent sitting on a park bench; whoever—who just look regal. Princely. Royal.

I think that’s there in all of us.You reach inside and set your feet on the ground at the heart of a quiet, graceful strength, and you square your shoulders and lengthen the back of your neck and you catch sight of yourself in the mirror and there it is:

Remember. You are a prince.

And then you still add an extra tour jeté and almost leave out that pesky balancé dessous and maybe there’s a moment when you suspect that you might just flat out fall out of your turn.

But you do it with your head high and when you’re done you roll your eyes and laugh at yourself.

Next week we’re in the theater for Nut, and then we’re off for three weeks, and then it’s on to the rest of Midsummer Night’s Dream and the rest of the season.

Be kind to each-other, and if there’s a weird oddball loner in your company or class, maybe try to reach out and see if you can draw them into the loop, because they might just be too afraid to try to do it themselves.

Oh, and here’s a shot of my back, just because 😁 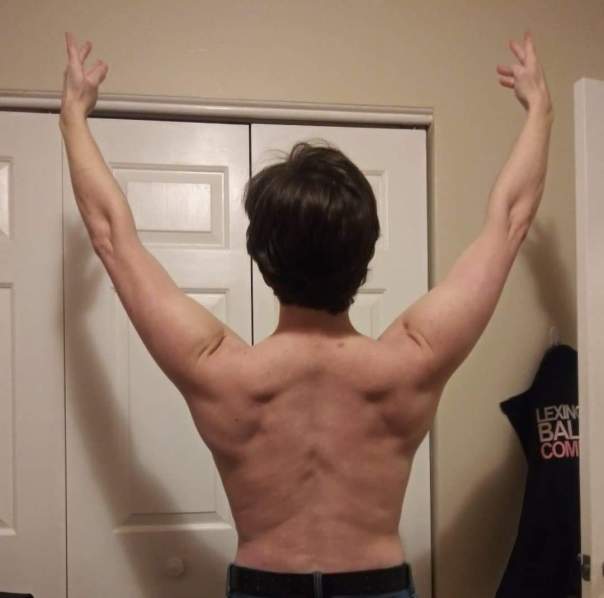 Posted on 2019/12/07, in #dancerlife, ballet lessons, balllet, learning my craft and tagged "brilliant" would be good but I'll take "serviceable", #dancerlife, #smallvictories, 90% perspiration. Bookmark the permalink. Comments Off on Last Studio Saturday.

← Reflections On Almost Half A Season
Ballet Lessons: Stay Together →