The Double Figure-8 Footlock: A Guide*

*Not really. Please seek qualified instruction before attempting this yourself.

Or, of course, firefighters of your preferred gender.

Learning to Fly: Weak (But Not Too Weak)

Today, we took our first class at Suspend — their “Cirque Sampler” offering, which lets you try things out (we focused on silks and trapeze).

We had a blast. It turns out that being a dancer makes silks feel pretty 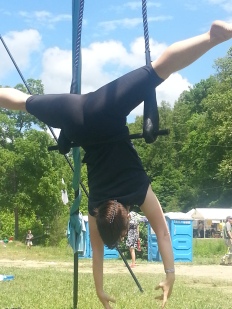 Yeah, I sort of don’t have any new pictures of aerial stuff, so please enjoy this blast from the past.

intuitive — but not so much that it makes you entirely equipped to pwn the silks right out of the gate. Works out about the same on trapeze.

In short, today’s lesson essentially confirmed my worst fears about my core- and upper-body strength (or lack thereof): or, well, maybe not confirmed them, but indicated that they weren’t entirely out of line with reality.

So, while I was intuitively able to do graceful things on the silks and the trap, I was not able to climb the silks (or, well, I could climb onto the silks, and that was it) or to hold the extended chair position for any length of time, and my straddle dismount on both silks and trap was somewhat uncontrolled, though not as bad as it might have been.

Denis, meanwhile, has the core strength of a hundred men and climbs like a natural-born monkey. Seriously. He’s just like, “Climb a thing? Sure, I can do that. Extended chair pose for four hours? No problem. Do you need me to work out the Grand Uniform Theorem while I’m at it?”

Basically, in terms of climbing and core strength, I got schooled by the hubster.

Also conveniently, we were able to convert our 10-class card (and $25) into two intro-unlimited-classes-per-month plans — one for each of us for the next month, starting Tuesday, and our instructor today said we’re good to go ahead and step into the second class of Intro to Aerials. w00t!

It looks like we’ll be doing aerials and circus arts on a Tuesday-Thursday-Saturday schedule for now, which should nicely complement my Monday-Wednesday-Saturday ballet schedule. I’ll still have two scheduled rest days, unless I pick up a Friday class somewhere, which depends on a number of factors. I do not want to overdo it.

Tuesday we’re doing Intro Aerials and Thursay we’ll try Acro Balancing, which looks fun. I’ve done a bit of that as a function of gymnastics training when I was younger.

Next Saturday, we’ll be trying juggling after Advanced class, so that should be interesting. I have never actually really juggled, so my day will encompass both something I do well enough to more or less legitimately take an advanced class and something in which I am a complete and unregenerate novice*.

*I realize that “unregenerate novice” doesn’t actually make a whole lot of sense, but gosh darnit, it sounds good, and because I also write poetry, I am just going to claim poetic license here and go with it.

So that’s our first day of life as Official Cirque N00bs.

In other news, I just realized that the grad school application I need to knock out this month needs a 7 – 10 minute audition video, so if I disappear off the etherwaves for a bit, my apologies. Between that, ballet, aerials, and a job I’m in the middle of applying for (for which I’m now in “doing evaluations and preparing for 2nd interview” phase), I don’t expect to come up for air again until the 16th.

Ballet class notes, however, might continue apace, primarily because I ride the bus back from ballet class, which gives me time to do that.