Yesterday, I posted this picture of my “Itty Bitty[1] Cambré Committee” cambré derrière: 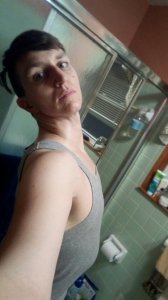 I shot it in our bathroom, and I wasn’t exactly attempting excellent technique[2], but I figured I’d go ahead and make an example of myself anyway.

You can’t see much of my back, here, but I can tell you based on the fact that my ribs aren’t locked down that I’m doin’ it rong.

Listen to Rainbow Dash. She knows what she’s talking about. (PS: I am now going to use this as a featured image for the rest of my Technical Notes series :D)

That said, I’m not going to focus on my back (in no small part because so little of it is visible): instead, I’m going to focus on One Weird Trick… erm, I mean, one key point about cambré back that I’m demonstrating all the way wrong, here, and that’s this:

When you first start learning cambré back (formally: cambré derrière), your teacher will almost certainly tell you to bring your working arm to fifty-third … I mean third … I mean fifth … ah, feck it, en haut and to turn your face towards its elbow before you begin to bend your back.

This is not solely because it looks cool, though it does. In fact, turning the head towards the working arm serves a practical purpose—it’s mostly a preventive measure.

What, then, does it prevent?

Glad you asked. What it prevents, my gentle reader, is the dreaded Noodle Neck.

“Noodle neck” may or may not be a technical term I laboriously translated from the Russian (шея лапшой … okay, okay, so I just ran “noodle” and “neck” through Google Translate and swapped the order because Assumptions About Grammar). Regardless, it’s a kind of “indicator species” fault that suggests a whole litany of problems further down the chain.

Simply put, it refers to the habit of letting one’s neck arch (or “crunch”) when performing the cambré back.

As you can now easily see thanks to my use of Ultra-Modern Technology[3], in the photograph above, my neck is definitely arched (Even though my head is turned! I’m talented, y’all.).

Instead of continuing to pull up through the crown of my head, I’m flopping languidly about like the heroine of some outdated romance novel, presumably waiting for the nobell laird to decide he’s had enough of murdering the MacAuleys and come ravage me instead. Or, um. Something like that.

Not to say languidity doesn’t have a place in the art of ballet. It totally does. If you’re not sure, the next time the Bolshoi does La Dame aux Camélias in its HD broadcast series, you should really go see it. The Bolshoi really knows how to get its languid on, and there’s a lot of opportunity for “languiding” (as a friend of mine from CirqueLouis calls it) in that particular ballet.

However! In cambré derrière, one must languid judiciously. It’s poor form to let the head dangle, and besides, it usually means you’re not really engaged all the way down (QV my embarassingly-splayed ribs).

Noodle Neck is also often a sign that one is attempting to initiate or artificially deepen one’s cambré by crunching the neck rather than lifting up through the full range of motion—which, in my experience, usually results from not actually knowing how to execute cambré derrière in the first place.

If you’re wondering what cambré derrière should actually look like, here:

Via Google; source sadly unidentified. Also, I’m comforted by the fact that I’m not the only one who makes that exact face during cambré derrière at the barre.

There may be some small measure of Noodle Neck happening, there, but overall it’s quite a good cambré derrière.

You’ll notice that our intrepid danseur‘s ribs aren’t sticking out like jocks at a fandom convention, and that you can draw a smooth arc from his hip through the top of his head with no precipitous drop-off near the top. There is no “crunching” at any point along the way—speaking of which, a “crunch” most often shows up in the lower back or the neck (or, distressingly, both at the same time). I, on the other hand, like to crunch at the point right where the ribs end, because I’m special.

Both BG and BW would, of course, yell at notre danseur mystérieux for letting his hips drift forward of his feet—but it’s better, in cambrés as a whole, to drift forward than backward.

Ultimately, although turning the head to look at the elbow is a useful shortcut when one is beginning to learn cambré derrière, only technique will prevent Noodle Neck.

What, then, is the technique in question?

You should not, at any point, cease to lift through the very tippity-top of your head (or, if you will, your “cheetah eyes“). Sure, if you’re flexible, you can do a full-on back bend just by flopping over backwards—but a floppy backbend is a recipe for injury in the long run. It also isn’t ballet.

“Lift,” by the way, is really shorthand for “Engage All The Things!”

Cambré derrière looks like it happens from the top of the head, but the engagement involved runs all the way down to the floor.

The action of lifting comes primarily from the muscles of the core. (Sadly, though mine continue to try, the eyebrows have little to do with it.) There is not, in fact, an invisible hook in the top of your head; rather, you’re technically pushing up rather than pulling up. It just looks and feels like pulling up. As such, I find it helpful to think in terms of lifting rather than pulling.

LWF describes the action of high-releases and cambrés derrières in terms of roller-coaster cars on a climb: the are lifted smoothly, each car drawing the next in its wake. All the cars remain connected, and they move together smoothly up the track.

You definitely do not want the lead car (that is, your head) to fall off the track. That’s a good way to get sued.

How, exactly, you wrangle all of this mentally in order to achieve the right process may vary—but I’ll be happy to blether on about the mental image that works for me (the one that I patently did not execute in the picture above):

Because the human body is shaped the way it is, if you try to lift UP as you send your weight down, you will eventually be forced to bend your back through a smooth curve.

It’s that or tear yourself into two pieces, which never actually happens in ballet classes. Or, well … hardly ever.

So, in review, here are some things to know about cambré derrière:

One last note: a really deep cambré derrière demands both flexibility and strength. If you’re bendy by nature, but not particularly strong, do not be surprised if your cambré derrière is quite shallow at first.

This doesn’t mean you’ve lost your flexibility; just that you have a good teacher who allows you to take your cambré derrière only as far as you can support it correctly.

Don’t despair. Depth will come with time, as you develop the strength to support your inborn suppleness.

If, on the other hand, you’re strong but stiff, you will probably develop greater flexibility over time, but you probably won’t be surprised if your initial cambré derrière is nothing to write home about.