Dances Without Moobs: A Gallery

Before I got my “moob job” (*snrk*), I had seen pictures of other guys who’d had similar surgeries but no idea, really, what to expect given my particular configuration. Likewise, I had seen a lot of pix in which the degree of visible scarring gave me pause (because modern dance because “Topless Boys Live!”)—and I definitely hadn’t seen pix documenting progress for this particular surgery on a dancer with a build similar to mine.

Anyway, because like almost every member of my generation I live with a smartphone surgically fused to my hand and take billions of shameless selfies, I now have a metric shedload of progress pix. I’ve decided to stick them all here, on one page, for the future edification of anyone else who might be thinking about doing this.

Your mileage, of course, will vary—but, if nothing else, I suspect that I’m a pretty good advertisement for this particular surgery.

Day 25: No suture-knots, no tape (except silicon scar treatment tape).

Flexing like an overwrought teenager, as is my wont.

My chest looks better than my eyes, which are hella puffy this morning because allergies.

The left side is particularly clean, even though the incision is a good 2 cm longer. I suspect that the portion towards my arm will be invisible within a few months.

A sneak preview of the nips.

Day 25: If you’d told me I would look this good after less than a month, I would’ve given you exactly this look. 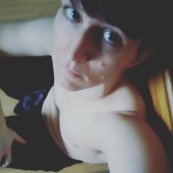