← Various Thoughts About Chicago, and a little On Ballet!
Random Thoughts →

I know, I know — I’m messing up the routine, everybody! But it’s okay. It’s summer break. The goal is to hit ballet class three days per week.

We missed Monday’s class: first, Denis was held hostage (well, not really, but it sounds more exciting that way!) by his dentist, who was fixing a tooth that Denis somehow broke in Chicago and we didn’t make it to the 6:15 class. Then we didn’t quite make it to the 7:15 class after picking up the truck from our awesome mechanic’s place. C’est la vie.

Today I did my first Wednesday class under the tutelage of Brienne, who runs a very athletically-demanding class. There is nothing like a good run of slow fondus to make the muscles wake up and sing.

I was a total mess for much of the class. My head wasn’t entirely in the game. The Wednesday class is in a different studio, which for some reason I wasn’t expecting, and I think it threw me for a loop. Somehow, at the Joffrey — where I expected a new studio full of new people — this wasn’t a problem. It’s all about the interplay between expectation and reality. No biggie: I need to learn to adapt more readily, and this sort of thing provides ample opportunity for practice.

This isn’t to say that I didn’t do anything right. I’m sure at least one or two counts of the grand battement were good, and while I didn’t execute our combinations at center all that brilliantly well, I did at least remember them.

I think the highlight of the class, though, was that slow-burning fondu exercise. It was demanding, it was even (at moments) painful — but it provided an exceptionally good opportunity to really focus on feeling which muscles were supposed to be working and making them work … even if I only managed to do it right for a few seconds at a time. 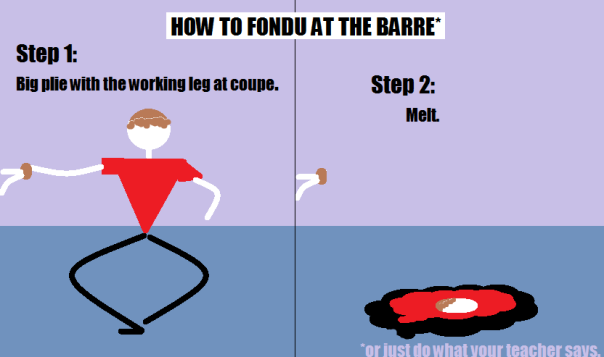 The rest of the time, I kinda looked like this.

I’ve learned that I really like having the opportunity to work with different teachers. I think I touched on this in my last post. Over the summer, it looks like I might routinely have classes with all three of the teachers I’ve met at LBS, which is pretty awesome. I’m collecting useful instructions and corrections — Margie’s commentary on using the first position port de bras as a gateway; Claire’s correction for my back; Lynne’s explanation about maintaining turnout through rond de jambe; Brienne’s very effective advice for finding and using the muscles that maintain turnout (and also for not slamming one’s heels together during dégagés).

Perhaps I should start posting a weekly list of useful instructions and corrections?

I’m looking forward to more classes with Brienne, Claire, and Margie (in alphabetical order), and to further re-creating myself as a dancer.

That’s it for now.

← Various Thoughts About Chicago, and a little On Ballet!
Random Thoughts →