← Giant Ballet Part-ay!
Ballet Squid Chronicles: In Which Everyone Has a Terrible Class →

The Way From Here To There

I should be doing my homework, but instead I’m being distracted by the internet. I went to bed last night with a sore-ish knee, slept badly, woke up early with a knee that had progressed from sore-ish to sore, so I’m sleep deprived and grumpy and being marginally lazy to see if the knee will sort itself out(1).

Something I read a few clicks back reminded me of a thought that’s been percolating in here for a while.

We hear a lot about people talking themselves out of their dreams by saying, “I’m not good enough,” or “I could never be x,” or being unwilling or unable to just visualize themselves as being whatever it is they hope to be(2).

We don’t hear as much about a problem that I suspect is just as common, if not more so — being able to visualize the top of the mountain, so to speak, but having no idea how to get there.

Right now, there are things in my life I can see myself doing and being great at. I just don’t really know how to get there. My worries aren’t about the destination — I have absolutely no doubt that I’d be awesome at being the things I want to be — it’s more about the journey.

Like, seriously, where did I put my map? And, um, is that a canyon between Here and There? 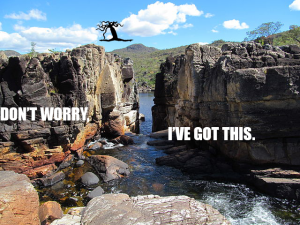 What could possibly go wrong?

This question bugs me much more than I like to admit. Like, I have this goal: become a dance/movement therapist. I feel confident that I’d be good at it. But I have only the vaguest notion about how I’m going to get there. Like, Columbia College looks awesome, and I really want to go there, but there’s a huge canyon between Here and There, and its name is OMG HOW DO I PAY FOR THIS?!

And I am pretty confident that I can make good dances that will be worth watching, and I can totally envision the Philip Glass Project coming together at Burning Man next year. I just have only faintest, foggiest idea how I’m going to make it happen.

Come to think of it, it might make more sense to imagine all this as a bunch of blank spots in the map labeled “here be dragons.”

I have enough Zen under my belt to know that it’s silly to worry about all that; that worry doesn’t solve anything and that we can’t control anything anyway.

Yet, still, I look out at the horizon, and I see this misty zone full of what might be chasms, what might be dragons; I look at my map, and I see this unknown, this void, which is more or less labeled “KAY DEFINITELY DRAGONS HERE.” And sometimes it freezes me in my tracks and/or makes me want to flee in terror. 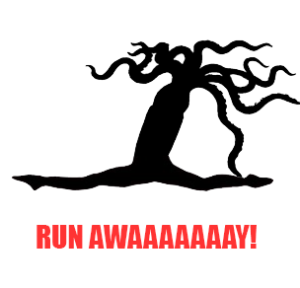 …FOUR IS RIGHT OUT.

A billion internets if you get that reference without Googling(3).

So, anyway. I guess the whole point is that, at the moment, the only way forward is, well, forward. With occasional divertissements, of course, to cope with dragons and such. And possible detours, and Alternate Routes(4). And maybe even a different destination in the long run, because who knows where I’ll be five, ten years from now? I know what I want, but what I want and what will be might not turn out to be the same thing. It’s possible I could discover some other Personal Mecca where I will bloom spiritually and otherwise.

I also know I’ve battled dragons before — some of which were big and terrifying and stuff, and some of which turned out to be Not-At-All-Smaug-Like Dragons who invite you in for tea and cakes (and don’t intend to serve you in the cakes).

And, more importantly, I’ve come through, and I’ve learned things.

Yet, I’m still convinced that any dragon I encounter is going to be a Problematic Dragon, and that I Will Not Make It.

So I can’t say I’ve got it down, yet. I’m still very much in the “Was that, ‘Carry wood, chop water?'” phase of my quasi-Zen existence. Like, I know the basic idea, but I’m not great at remembering it when I need it.

And, frankly, those gaps in the map kinda freak me out.

But, you know. Writing about it makes me feel a little better, so there you are.

That’s it for now. Homework does not seem to be forthcoming, so I’m going to go do housework instead in an effort to do accomplish something useful prior to running away to the Giant Ballet Party tonight.

Posted on 2014/10/09, in life and tagged here be dragons, life, plans, there is no map, you can't get there from here. Bookmark the permalink. 2 Comments.

← Giant Ballet Part-ay!
Ballet Squid Chronicles: In Which Everyone Has a Terrible Class →