Danseur Ignoble: If You Can Describe It, You Can (Eventually) Do It

Or, The Enabling Nature of Formal Ballet Vocabulary

For those who find foreign languages challenging (full disclosure: I don’t), entering into the world of ballet can be daunting.

Suddenly, you’re learning not only a new way of moving, but also a foreign language — one that sometimes conflicts with itself (Are my arms in third or fifth?  …I don’t know, are we doing Vaganova, Paris Opera, or Cecceti today?). 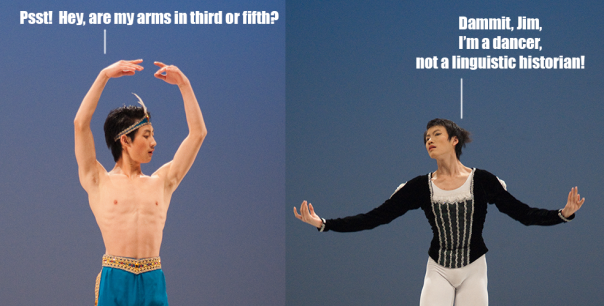 You have to memorize all these words (some of which already have more than one meaning in your normal, everyday language), and then you have to remember them and perform the corresponding actions in the right sequence when your teacher shoots a string of pidgin French at you at the end of class.  And then you have to remember them again next class (which, in the beginning, often means “next week”) and probably learn some new ones.

On the other hand, with the exception of minor quibbles over whether one’s arms are in third or fifth (aided by the fact that every teacher and dance master in the history of ever pretty much automatically demonstrates which one they mean as they’re describing the combination — seriously, even if the rest of them is standing still, bras  gonna port) and whether to say “B+” or “attitude a terre,” the upside of this whole conundrum is that in ballet, we understand each-other.  (Well … Mostly.)

When someone says pirouette en dehors a la seconde, once again, if you know what pirouette en dehors mean and you know what a la seconde means, you can figure out what’s intended — and, if you know you can execute both movements, you can probably even figure out how to do it.  Maybe not well, at first, but learning is almost always a process of successive approximations of goal behavior (hooray for Applied Behavioral Analysis!).  Chances are you looked kinda funny the first time you rode a bike, too.  Dancers learn by doing.

Likewise, once you develop enough vocabulary, you can ask other dancers what the names of things are: “You know that thing that looks kind of like tour jete, only you’re kind of rotating around one leg that’s in attitude? What the heck is that called?”  Of course, half the time, the name of the thing you’re looking for turns out to actually be “name of thing you already know” plus “a la seconde” or “in attitude” or “from fourth,” possibly with a modifier like “en dedans” or “en dehors” or “grande” or “petite.”

This doesn’t always work as well as it might: it took me, like, three separate searches to figure out what the “thing that looks kind of like tour jete, only you’re kind of rotating around one leg that’s in attitude” is called (ungracefully) a “barrel turn.”  But almost everything else in ballet can be picked apart based on its technical name (and it’s possible that the so-called “barrel turn” — which, I’d like to point out, is neither a barrel, nor a turn, but is a jump that has a turn in it — has a technical name I just haven’t discovered).

I’ve been thinking about this quite a bit in the context of choreography (in part because my project for this summer will involve explaining choreography to people who may or may not have a firm grasp of ballet vocab: yes, I plan to impart the names of things, but that doesn’t mean people will remember them).

Like, ballet choreography is maybe a bit easier to transmit than modern dance choreography, given that we have a standardized vocabulary from which we work.  Admittedly, that vocabulary can’t transmit style.  Watch some video from NYCB, some from the Bolshoi, some from the UK’s Royal Ballet, and some from the Dutch school, and you’ll see that there can be enormous stylistic differences, some of which — a la NYCB — trace back ot a specific choreographer.  However, the basic elements of a dance can be transmitted intact, down to the beat (or even half-beat; the “and” bears great importance in dance).

Curiously, while I have some modern dance background, I’m not really sure how this works in that context.  Like, my modern dance teacher was awesome, and because of that we always knew what she was talking about: but “Down, down, UP, down!” means one thing when you’re doing that frog-jumpy thing and a totally different thing when you’re doing what’s essentially a series of plies with a saute in the mix.

Different seminal choreographers have developed different vocabularies.  They tend to be descriptive, but description doesn’t necessarily convey intention as well as we’d like.  “Slash” (perhaps a term no modern dance choreographer employs?) could mean a lot of different things.

To be fair, ballet has been around for hundreds of years at this point, and it developed a tradition of formal codification pretty early (being as it was founded upon strictly-regulated court dance).  It seems possible, even probable, that as modern dance (which is, what, a little more than a hundred years old?) evolves, it too will develop a cross-school choreographic language (rather like the way music has evolved a language of its own; all musicians speak at least a little Italian and/or German).

It’s at least equally likely, though, that it won’t — the coherence that exists in ballet reflects its foundations.  It has evolved divergently (hence “Are my arms in third or fifth?”) rather than convergently.

In short, if I can describe it, I can eventually do it (even though I’m actually a kinaesthetic learner, and therefore more often move from doing to describing than vice-versa; I figured out saut de chat — one of the less-descriptive things — long before I knew what it was called; likewise foutte [again, not the “black swan” variety”]).

Unfortunately, that doesn’t really help me with the barrel turn.  I can turn, but I can’t barrel.  Or, well, I can barrel, but more in the context that means “speed wildly,” like “barreling down the hill.”  So I’ll just have to learn that technique the old-fashioned way, through demonstration, attempt, falling on my ass, and repetition — in other words, successive approximations of the goal behavior.

But not just yet.

Posted on 2015/02/25, in balllet and tagged ballet, ballet vocabulary. Bookmark the permalink. 2 Comments.