Last Wednesday, I wrote out my usual class notes but never got around to posting them because we jetted off to PlayThink Movement and Flow Arts festival right after class.

To summarize: I made it through all of class last Wednesday; mostly kept my proverbial waterfowls in a linear array during barre; managed some rather nice center adagio; did rather well going across the floor to the right and somehow lost the combo going left (qv: threw in an en dedans turn where there should have been an en dehors turn and my brain clicked on and proceeded to hose me up completely — I repeat: THERE IS NO THINKING IN BALLET); nailed some entrechats quatres; and didn’t get the medium allegro combination down (in case you’re wondering: when you’re tired, it’s a good idea to mark the combo, because your brain alone might not catch it).

While we were in Florida, I did a lot of tendus, frappes, and degages in the water, as well as some grand battement. That made a big difference to my speed during petit and medium allegro last week. It would be awesome to have regular access to a pool in order to work on that stuff!

At PlayThink, my goal was to gain some more exposure to aerial apparatus. Terri and Cindy from Turners were back again this year, and they’re both great teachers (Terri, in particular, reminds me of Brienne :D).

Last year, we only got to try stationary trapeze because of timing issues. This year, we got to try: 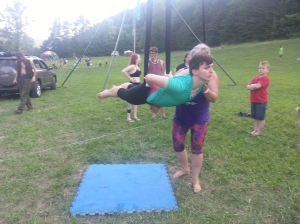 Cindy led a great aerial hammock class. Here, she’s showing me how to get into a forward balance (once you get to this point you take your hands off the hammock; I don’t have a picture of that, though). I didn’t get pictures of the coolest parts, since Denis was in the other group on one of the other rigs at the same time. 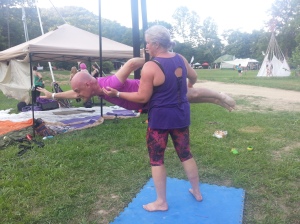 Denis points out that it looks like Cindy is doing a stage magician’s levitation trick with him, here 😀 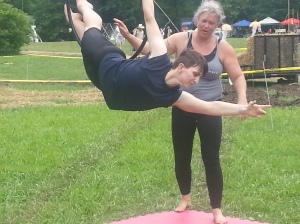 Mermaid with a slightly-broken line: I should’ve brought that arm up just a tad higher 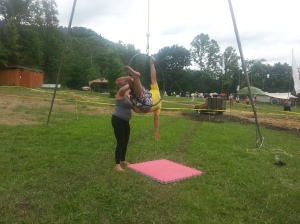 Denis gets his mermaid on 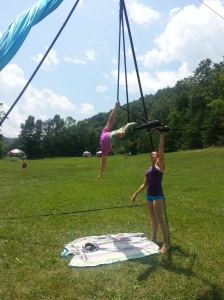 Denis on the trap: just call him “Susan.” 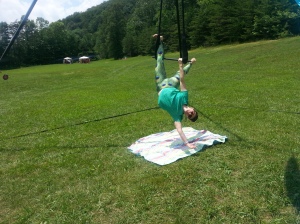 The sunglasses just sell it. *snrk*

And then, because we had the opportunity, we played on the trapeze a bit more: 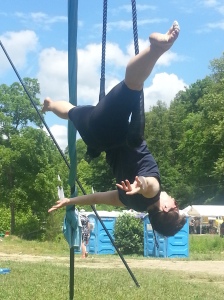 I need to practice this one more. I tend to set up too low. Terri got me sorted, leading to this rather lovely moment. 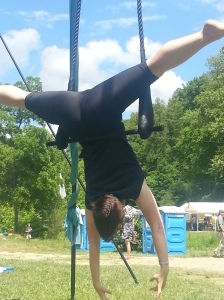 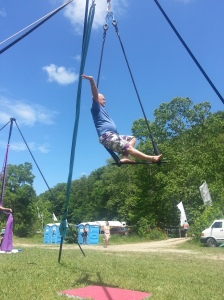 Denis is more nervous on the trapeze than I am, but he still got both hands off the ropes.

The trapeze was set about 2 meters up during our second session, and I wasn’t sure I’d be able to get up there, but it turned out to be very doable.

Of all the apparatus, I think I enjoyed the hammock most (which, by extension, probably means I’d also really love silks; we missed the intro silks class, though, since Denis had to work on Wednesday morning). I’m pretty flexible, and hammock takes advantage of that in a particularly cool way.

Things I learned this weekend (besides new moves on the aerial apparati):

Both Terri and Cindy teach locally, and Terri will be teaching at the new aerial arts studio that’s opening (which is in a really convenient spot and offers a very reasonable price structure), so I’m hoping to add some aerials to my rotation. I think they’ll be pretty compatible with ballet, and the class times won’t conflict.

First, though, I need to get some income happening 🙂