Since my cough was still keeping me up all night, I went to the doc-in-the-box on Monday afternoon. She listened to my lungs and said, “Ah-hah!”

It turns out I’ve got acute bacterial bronchitis. I’ve been running around assuming that this was some kind of sinus-drainage-induced-annoying-cough-thing that would clear up on its own. So … um, oops?

I was initially rather annoyed that I’d developed bronchitis, but then I realized it’s actually been quite a while (by my standards) since I’ve had it, or at least since I’ve had a case that warranted medical intervention. I feel like I still get sick more easily than most people, but my overall health is improving. I spend more time being reasonably well than I used to. Thanks, ballet!

So now I’m on an antibiotic and a prescription cough syrup. That should, I hope, get this shifted, though at this particular moment I’m still pretty uncomfortable.

I was able to sleep four about four hours tonight before the prescribed cough syrup wore off and I started coughing again, so I’ve taken my second dose for the night.

Since the cough has been at its worst when I’m lying down (convenient, right?), I decided to get up and give the medicine time to work its magic so Denis can sleep. He deserves a good night’s sleep for many reasons, not least because he’s been so great about looking after me while I’ve been useless and miserable.

The downside to the timing of this whole thing is that I’ve been invited to audition for a dance performance, and I’m iffy about whether or not I’ll be entirely back on my feet by the first weekend in October. (Or, rather, whether I’ll both be back on my feet and adequately rehearsed.)

The upside is that if I make it through the audition (that sounds so dire: there probably won’t be a shark pit waiting for those whose works don’t quite cut it), the performance isn’t until February, so I’ll have plenty of time to arrange my waterfowls in a linear array. 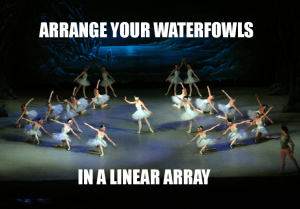 Part of me says that I’m just being a big ol’ chicken (duck! :V). There’s some merit to that argument. I talk a good game, but my confidence about my ability as a performer and choreographer is, shall we say, still embryonic — you know, as yet unhatched.

Still, I must not let it ruffle my feathers.

…Okay, I’ll stop with the, ahem, poultry attempts at humor.

At any rate, I’ve bitten the bullet and signed up for an audition slot. After all my whinging about the challenge of finding performance opportunities, I can’t very well pass one up when it’s handed directly to me!

I have a piece in mind, though it’s a little on the short side (~4 mins; audition pieces need to be between 5 and 12 mins long). I’ll have to see if I can expand it a bit. If not, I may have to whip up something fresh — I do have some ideas, though, so that should be doable. I hope.

Being who I am, I feel a great deal of anxiety about the audition and essentially none about the concept of performing before (GASP!) an actual audience comprised of people who have actually paid actual money to actually sit down and watch. In short, I figure if the folks putting this performance together think I’m good enough, then I probably am*.

*This is very much consistent with my personality in general: I have absolutely no fear of public speaking before large groups, but the idea of carrying on a conversation with three or four strangers? Scary.

Here’s hoping I’ll be back in class this week. I’m going to need it. It seems unlikely that I’ll be up for Brienne’s class on Wednesday, but I might be able to handle Margie’s class. I’m optimistic about Friday, at any rate.

In other news, it looks like my primary employment this year will be with Porchlight Express, refitting the website and getting the other communications stuff sorted. That will take up a significant portion of my free time, so it’s useful to know that I probably won’t also need to pick up another part-time job.

I also still need to sign up for the GRE (OMG, WTF, BBQ) and submit my grad school applications. Oh, and take the driver’s exam at some point, hopefully before the 4th, in case Denis doesn’t feel like driving to Cincy for the audition. (But, seriously, there’s an IKEA there — why wouldn’t he want to go to Cincy?)

On my life-anxieties scale, by the way, this audition thing is right at the top. I feel pretty confident about getting accepted into one or more DMT programs and quite confident indeed about being able to really polish the PLX website now that I have time. That really rather puts things in perspective for me!

Anyway, I’ve stopped coughing up furballs for now, so I shall try to go back to bed.