I arrived early, and Dr. K (who made my week last time we were in class together) and I chatted for a while. Apparently she did very much intend to compare me to Nureyev, so I am now even more flattered — evidently I remind her of Nureyev both in build and in the way I dance — my attack, jumps, expressivité, plastique, and movement style. Um. Wow?*

She added, “And you have that beautiful arabesque. His wasn’t as high as yours.”

*Why, yes, I am currently experiencing an intense inner battle between my Impostor Syndrome, which says, I’M NOT WORTHY! and the rest of me, which is like, Geez, enormous responsibility, innit? … so many feels.

I told her how helpful her comment had been. It has really helped change how I think about my limitations as a dancer — Nureyev had similar limitations, and he was one of the greatest dancers ever. The thing is to accept one’s limitations and work to ameliorate them while making the most of one’s strengths.

Barre today looked fairly good. There were a couple of moments that I reverted to a similar combination from Saturday’s class, but I caught myself (and laughed at myself, as Dorky Dancing reminds us to do, instead of getting mad).

Adagio was iffy on the first side because I was confused about the counts, but fine thereafter. My penché is improving again; in tour lent (AKA promenade; it’s promenade in partnered work) coming out of penché, I need to remember to carry my opposite shoulder more.

Basically, in order to hold the body together, the opposite shoulder spirals toward the working leg. This is exactly the same as it is in arabesque (and everything else), but it takes a little more actual doing. Of late, my body wants to spiral over as if in a modern-dance-y slow fouetté, so I need to really watch that.

Doing turns terre-a-terre, I managed a triple; should’ve aimed for more, but chickened out. Next time. The combination was:

It fit about 1.75 times across the floor — on the second set, the piques could either run down the side of the room or we could just leave them out. For some reason, we all kept forgetting to spot on the second set. Weird.

Petite allegro was half fine, half awful.

My little jumps were actually beautiful — light, fast, high, and quiet — though I couldn’t get my arms to cooperate.

The combination went, simply, from fifth:

First
Second
Opposite Third!
Bring working-side arm up for Fourth
Fifth/Thirty-Fifth/En Haut
Open and return to en bas/préparé smoothly over the the changements.

I tried to get the arms on the first set, then just left them in first in the second (which is hard in its own way — there’s so much existing motor programming that not moving them not that much easier).

None of us could do it at speed without hosing up the arms, though we could all mark through slowly with success. I’ll be practicing this one.

Our next combination was simple:

The tempo was wickedly fast, however, and my assemblé was simply too slow. I’ll be working on that this week as well.

Edit: forgot about the Sissones! I am to have regained the motor pattern for Sissones finally. I have no idea where it was for the past few months, but my brain must have defragged or something last night, because it’s back now. The challenge is simply to NOT FREAKING THINK. Thinking + Sissones = Disaster.

Grand allegro was lovely, even though it took me a little while to nail down my own little variation. We soloed this, because we were in the tiny studio and there were only three of us today, all fairly advanced students.

But it turned out that there wasn’t enough room for that, and I kept doing very half-baked Bournonvilles so I wouldn’t crash into either the wall or the piano. One turned into something else entirely (Edit: a Blooperville Jeté, perhaps?).

On the repeat, I subbed in:

This happened when I decided to stop thinking and just dance (hence the title of this post!). To be fair, tour jetés tend to happen whenever I just let myself dance, because I love them.

Dr. K commented that she was really impressed with my ability to stick a landing and go straight into a balance 😀

The funny part is that I find it easiest to hold a balance if I jump into it — my dynamic balance is really exceptionally good, while my static balance is only pretty good (read: quite a bit better than average compared to people without formal dance training, but probably only average for those with serious dance training).

Ms. E kept calling out, “BIIIIIG tour jeté! … Yesss!” on my runs. Apparently people have noticed that this white boy can in fact jump, so now they routinely ask me for big, lofty jumps.

As for me, I’m simply glad to have my big jumps back. It took a while to regain the power and coordination to get the kind of elevation and ballon I had as a kid, which I got partially through luck (genetics ftw) and partially through setting up and jumping ever-higher backyard hurdles (at one point, 42″) which I jumped in a style that in no way resembled proper track-and-field hurdling technique. It was more like Russian Pas de Chat over fences.

Anyway, it’s time to eat food (I have been bad about that lately — last night I turned into an absolutely horrible creature because hypoglycemia for the fail). Tonight we have fitness & flexibility, silks, and then I’m going to work on choreography with a friend of mine.

Edit: Oh, and  here are my ridiculous pictures from this week’s submission to Suspend’s Splits Challenge, just for the halibut.

As you can see, we were feeling goofy, even giddy, perhaps.

They went that way! After them!

This is just campy as hell, because why not? 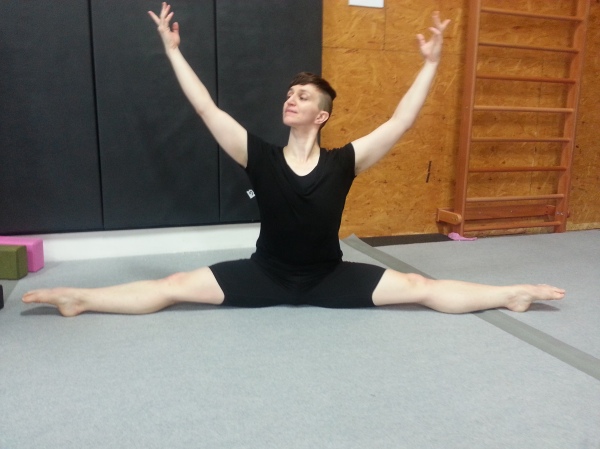 This picture makes my arms look so much longer than they really are relative to everything else. Also, hands be like, “DON QUIXOTE!” As always.

Posted on 2016/07/11, in balllet, class notes and tagged accept & transcend, grand allegro is the best allegro, petit allegro is my nemesis. Bookmark the permalink. 11 Comments.