← The Onliest Boy Rides Again
History In Our Tights →

Modern was rather great today. I figured out how to do it without annoying my foot. I’ve discovered that the only thing that makes it hurt is putting even a little pressure directly on the outside of the joint, which happens with alarming frequency in modern dance. I simply faked my way through anything that involved that (safety releases, etc) and things went fine.

I’m still fairly terrible at remembering modern combinations, but that’s nothing new. It is slowly improving.

BW’s class tonight, meanwhile, was quite good once my body decided to wake up and participate. I think it was feeling sluggish because I’d just subjected it to a rehearsal followed by no stretching and a 20-minute drive. I suppose it was within its rights to feel grumpy about that.

Anyway, we did all the jumps today: so much petit allegro, followed by one grand allegro exercise.

One of the petit allegro exercises involved temps de cuisse, which I’ve been erroneously calling temps de puisse ever since I for some reason decided it was, in fact, power-step and not thigh-step. But I was right the first time, which is funny for the very specific reason that I initially thought it was really neat that the step was named after a piece of armor, then disappointed that it wasn’t … but I was wrong, and it really is named after the piece of armor!

…Which is pretty cool, though POWER STEP!!!!!111oneoneone1one1onewon is also a pretty cool name for anything in ballet.

Anyway, turns out temps de cuisse is supposed to be done upstage to effacé. Also turns out that when you do it that way rather than trying to do it en face, it’s a hell of a lot easier. 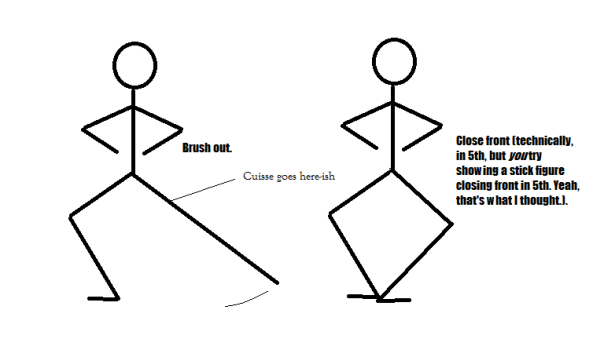 Oh, and remember that you “BOING!” upstage to efface, which I completely failed to indicate here because laziness.

The weirdest bit is that I remember looking this up, but maybe that happened in a very vivid dream, and I can file it away with BW’s choreographic advice about rotting fruit?

This is the most important thing I’ve ever learned about ballet, and in fact about dance in general: with few exceptions, things are largely easier when you do them correctly.

In fact, I would almost go so far as to say that this is pretty legit advice for life in general.

I don’t actually remember the rest of that combination at the moment, though I know involved entrechats, because I had done fugly entrechats in the second petit allegro exercise and was startled that they miraculously just plain worked in this one (probably because I was busy thinking about temps de cuisse instead).

Anyway, for grand allegro, BW gave me the choice of various species of jetés across the floor or tours. I said, “Tours, because I never get to do them in any other class,” which met with approval 🙂

Anyway, BW gave me a little combination that went something like:

I tried this a couple of times and alarmed myself by doing 1.5 tours instead of proper singles … and then I ran the combination again, got off a nice single, and promptly fell the feck over. Like three times.

BW said he’d had the same experience, and once in fact left class in tears because he couldn’t stop falling over. He also pointed out that falling over means you’re trying really freaking hard. Which, in fact, was true.

I’ve had a bad habit of doing itty-bitty little cautious tours, which probably have their place somewhere in the great universe of ballet, but honestly aren’t very interesting. I’ve decided that I’m going to launch all my jumps into space all the time (okay, okay, exept when we’re doing petit allegro), in the interest of actually A) being an interesting dancer and B) making the best possible use these giant slabs of ham with which the Universe has for some reason seem fit to favor me instead of normal human legs.

Anyway, after falling over backwards a few times, I decided to switch sides, and except for the part where my brain insisted the first time on doing the right-side variation anyway, the left side came off without any falling over. I then tried the right again, almost fell over but caught myself, and realized that a part of the problem was simply that I was instinctively trying to avoid putting my right foot down.

You can do tours to a single foot if you’re doing actually doing tour-to-the-knee, but you have to do it on purpose(1). Otherwise, you half-ass things and fall right the heck over.

So now I know two different ways to fall over doing tours.

A. Forget to change your feet.

The first thing you do in a tour (well, after lift-off) is change your feet. If I remember correctly, not everyone does it this way, but it’s the standard, and the guys who change the feet last are stylistic mavericks. Anyway, I once tried doing a tour without changing my feet just to see what would happen. I managed to stay upright, but just barely; if I’d put any real force into it, I would’ve been flat on my tuchas in a heartbeat.

B. Change your feet, but then fail to actually put the one that started in front down all the way.

In a tour, your feet act as a kind of braking system. You load up a metric shed-ton of momentum, and changing your feet and sticking both of them on the ground allows you to oppose that momentum in a meaningful way so you don’t fall on your butt and roll, which seems like it might actually be a valid way to end a tour if you’re dancing a role in which that’s how you die, but probably should otherwise be avoided.

Artist’s depiction of how not to land tours. Any resemblance to Kokopelli experiencing wind turbulence is entirely coincidental.

Anyway, the falling-over-backwards bit was pretty hilarious, mainly because it was a complete surprise Every. Single. Time … at least until I figured out why I was doing it.

By then, it was just after 8 PM anyway, and we’d been working for more than 90 minutes, so we called it a night.

Sadly, I won’t have class with BW next week because of rehearsal, but he is coming to see us dance that Saturday.

This Saturday is our final fitting, and I finally get to find out what I’m wearing in the performance other than white socks and white shoes (SPOILER ALERT: YES, there is a shirt).

Tomorrow, we have Awesome Acro Workshops, followed by a weekend of madness and final costume fittings and a rehearsal on Monday.

Next week, I am taking Tuesday OFFFFFF.

Posted on 2017/03/09, in balllet, class notes, technical notes, uggghhh...technique and tagged temps de cuisse, tours, turns out it really is called temps de cuisse after all. Bookmark the permalink. 2 Comments.

← The Onliest Boy Rides Again
History In Our Tights →