I mean chaînés, of course. Everyone loves chaînés sooooooooo much, amirite?! They are The Actual Best[1]!

I’ve spent the past year or two trying to make peace with chaînés. It has, in fact, largely worked. Two things—learning that dudes usually don’t piqué into chaînés and that it’s fine to do your chaînés in fifth—led to some dramatic improvements.

However, somewhere along the line, I started losing all my momentum going into any run of chaînés. 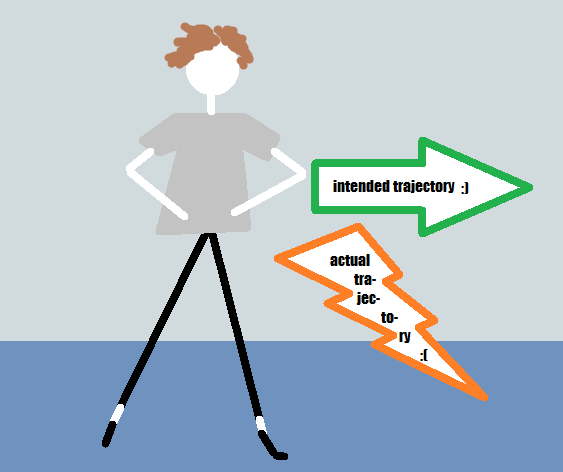 Chaines: Scourge of the Universe (you guys, I can’t believe how weirdly applicable this is, given that I made this graphic in like 2014)

Not cranking the turnout-brakes (read: that thing you do to halt your momentum if you have to finish a soutenu turn in sous-sus) helped, as in it prevented me from actually grinding to a halt after one turn, but it didn’t solve the problem entirely.

Today, though, Killer B fixed the remaining bit of the problem: she said, “You can piqué or chassée into your chaînés, whichever works better for you … but right now you’re tombé-ing in, and it’s killing your momentum.”

So I tried the chassée–chaîné approach, and HOLY CRAP GUYS IT WORKED. Made my chaînés about twice as fast, in fact. (Which is good, because sometimes they were embarrassingly slow.)

basically applicable to my entire life at all times

Like, I remember BW giving me a lesson on chaînés as pertains to Men’s Technique, and that he taught me to not piqué into them … but at some point I decided explicitly that tombé was the One True Way.

(Evidently it is a correct approach, but not one that works particularly well for me: I tend to tombé into a deep demi-plié way over my front leg as if preparing for a sauté arabesque or something. Ultimately, that means that my momentum can go straight up or back the way it came, but not really forward except through pas de bourrée … I guess it would be useful if I needed to change directions straight into a series of chaînés, though.)

The waltz combination today was:

I’m trying to figure out if I’m leaving out some waltz turns somewhere, or if they were in something else and I’m conflating my memories[2].

Regardless, the chassée–chaîné approach is a freaking lifesaver.

I was going to drop a YouTube video that shows this in here, but my exhaustive* one-minute long search hasn’t found one, so it’ll have to wait.

Guys: if an approach via tombé is sending your chaînés to an early grave (get it? tomb … é … early grave … harhar), try chassée instead.