…Assuming that it is in fact still Saturday. Honestly, being off sick has really screwed up my internal calendar. (I dare not even contemplate what it’s probably doing to my internal- and external rotators .__.,)

I’ve officially switched to my springtime header, so if winter decides to repeat its coda* yet again, sorry about that.

You may lodge any complaints with the National Oceanic and Atmospheric Administration**, which is clearly losing its battle with the capricious demiurges of weather, who in turn don’t want any snot-nosed dance blogger*** telling them what to do.

*Prolly the Nutcracker Prince, amirite? Because obvs. Winter. Always showboating. SMH
**These are the folks who run the US weather machines, yesno?
***Who hopes to be slightly less snot-nosed soon, through the miracle of modern medicine? 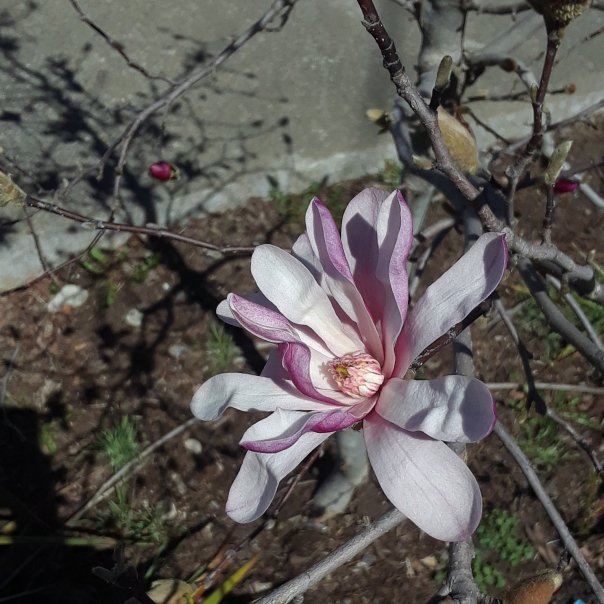 Let this two-week old shot of a hardy magnolia blossom stand in for all the trees currently in flower that I have failed to photograph because I’m sick.

Yesterday I checked in with my GP, who is awesome on numerous levels (not every doctor closes out an appointment with, “When’s your next show?! You have to tell me so I can get tickets!”). She confirmed my sinus infection and sent me off with a ton of prescriptions—specifically, levofloxacin and pseudoephedrine, plus the usual generic Adderall—which I proceeded to fill at the usual CVS.

I’m sure my local band of intrepid pharmacists think I’m basically a crank addict or running a meth lab or whatevs. (Crank is speed, right? Yesno? Why, of course there’s an answer for that question on the internet.) I can see why they might think that, given my prescriptions and the fact that this end of town is sort of known for that sort of thing.

Really, though, I just want to be able to breathe through my nose and adult.

At the same time, even.

And, sadly, while psuedoephedrine marginally improves my adulting abilities, it doesn’t do so effectively enough that I could, say, skip the Adderall for now. Adderall, meanwhile, does exactly nothing for my congestion, as best I can tell.

So, there you have it.

Normally, the combination of psuedoephedrine and Adderall doesn’t actually make me feel like anything other than a person who can both breathe and efficiently accomplish important goal-directed behaviors pertaining to daily life. Apparently, however:

At least, to be honest, I assume that’s what being high AF feels like. My illicit substance-use history comprises, in short, the occasional glass of wine and a few beers (and never more than two in one day) prior to age 21[1]. At one time, it was because I was that annoying judgmental straightedge kid[2]; at other times, it was a function of fear of addiction; now it’s just basically force of habit. Which just goes to show that anything can become a habit.

Anyway, I’m just not sure how else to describe the weird state of consciousness in which one is both somehow very, very like awake but also … floaty. Spacey.

So: basically me, yesterday. Actually, the weird, muffled quality of sound and the weird delay between brain and body makes this an even better analogy.

Admittedly, I probably could’ve skipped the coffee … but I decided, as one does, that since I was officially not contagious I should peel myself out of bed and go to rehearsal, and that involved driving, which involved staying awake.

Which was a problem, because awake was the one thing my body absolutely, positively did not want to be. (Actually, there are a whole host of other things it didn’t want to be, but they’re all basically subsets of awake.)

Honestly, the single most alarming thing about this particular sinus infection has been the absolutely crushing fatigue.

Like, driving home from my doc’s office, I was constantly fighting the urge to just close my eyes and go to sleep. Not, mind you, just thinking, “Gosh, I’m really sleepy, *yawn*” but actively having to tell myself:

DO NOT CLOSE YOUR EFFING EYES, MORON. NO. NO. OPEN THEM BACK UP. IT IS NOT OKAY TO BLINK FOR 5 SECONDS AT A TIME.WHAT ARE YOU DOING?!

This, remember, is me: the Boy Who Stayed Awake. I do the driving on all our road trips because I can stay awake more or less indefinitely as long as I’m sitting upright (read: I can only sleep sitting up with assistance from modern pharmacology, and have been like that my entire life).

The same person for whom achieving a night’s rest typically involves less “going to sleep“ than “lying there in hope that sleep will eventually trip over me on its way to meet someone in the Pacific Time Zone.”

Like, literally, I only realized last year that people can actually, you know, actually go to sleep.

So having to fight to stay awake … WHILE DRIVING, no less … is something of a novelty.

One that I addressed by drinking WAY THE HECK TOO MUCH COFFEE.

Anyway, basically I floated my way through rehearsal in a state that resembled somehow experiencing that hypnagogic sense of falling through space whilst remaining upright and alert (well … more or less).

Fortunately, the part of the show that we worked last night mostly takes place sitting at a group of tables, and I was able to mark it without actually having to fall on the floor (technically called for at various points, but not necessary when marking). Which is good, because had I made it to the floor it’s highly unlikely that I would then have made it back off the floor.

Then I ate a bunch of chicken-flavored crackers, recopied my choreography notes (you guys, I have never done a piece that involves this much writing: this thing is complicated), and went back to bed. Exciting, right?

Page 2. Of 4. Amazingly, this all actually makes sense to me.

Amazingly, I’m pretty sure I actually learned the choreography I needed to learn. See all those letters in circles at the bottom of the right-hand column? Those are 4-count phrases. There are six of them, continuously mixed and re-mixed throughout the piece, comme Rosas Danst Rosas (speaking of which: if you haven’t seen Rosas yet, you can watch the whole thing there … and then, if you’re feeling inspired, you can create your own take on it as part of a worldwide project).

The longer I spend in the rarified climes of the dance world, the more I realize that I am the kind of dancer who learns modern choreography best by, in short, brute force.

Show me a phrase once, and I’ll feck it right up. If I’m lucky, I’ll have shot a good mental video so I run over it again and again in my head and have learned it by the time I’m halfway home.

Show me a phrase, then walk me through it three times, and I’ll start to give it back to you accurately. Let me run it around six times[3], and I’ll start adding musicality and nuance.

This means, in short, that I struggle at modern auditions, but I quickly become an asset in rehearsal.

The downside is that it makes me very hesitant to rehearse modern choreography on my own, because I’m afraid I’ll misunderstand part of the demo and train myself into a step that isn’t there, or that goes somewhere else, or whatever. I develop pretty strong motor patterns, and fixing them can be a challenge.

I also managed to come up with my own special shorthand notation for the set phrases that are remixed and sequenced throughout the piece:

That felt like rather a stroke of genius, to be honest.

I’m not primarily a verbal learner, but in ballet contexts I use the names of steps (or, well, sometimes the nicknames I’ve privately given them) synchronized to the rhythm of the music (or the counts) as a backup system for when I’m missing a piece of my visual and kinaesthetic maps. This little cheat-sheet of four-counts represents a surprisingly successful attempt to create that same kind of backup system in a modern-dance context.

The sort of tablature of notes further up evolved over the course of the first day of rehearsals, though I’ve refined it a bit since the first iteration. It acts as a framework; kind of a score, if you will, to keep track of what happens when.

At the beginning, for my group, so much of this piece is counting like crazy, then throwing in some small-but-important gesture. Even “PAUSE” has a specific meaning entirely disparate from “HOLD.”