Thursday: Rain On My Parade

Since I am, by nature, a giant show-off, I joined a detachment of my fellow ballet peeps in the Pegasus Parade yesterday.

Although the weather was drizzly and blustery, the parade was fun. Even the standing-around-for-three-hours clusterfeck was reasonably fun, since I was standing around with BG, T, C, E, AB (our in-house yoga teacher), and, um, the one girl whose name I for some reason can’t remember (apologies!). We kept each-other entertained with snark, irony, and occasional earnest conversations about what we’re doing with our lives.

After a while, myAdderall wore off because I forgot to my second dose for the day, and I remembered an important equation:

me – Adderall + standing around with nothing to do^(enough time) = idiocy

Fortunately, I did not (seriously) injure anyone with my giant umbrella. I miiiiiiiight have gotten a little too enthusiastic during a bout of umbrella fencing and poked BG in the chest (regarding which: I should probably not be allowed to have a giant umbrella until I learn how to keep a lid on things 😦 ).

The parade itself was 17 blocks of ballet walks, waltz turns, random partnering exercises, spasms of grand allegro, and occasional yoga.

My foot did not make it through without getting sore at all, but it only got a little sore.

After, I booked it to BW’s class.

Have I mentioned that I ate lunch at 11:30 and then completely failed to eat anything until after my haircut, which finished up at 9 PM?

BW’s class, truncated, was an hour of barre, slow but not easy. By the end, my feet didn’t want to point and my left leg basically argued my about brushing into an arabesque above 70 degrees and then folded into attitude on what was supposed to be a an arabesque in plié. BW said, “Let’s callgood it a day and stretch—you probably haven’t eaten since lunch, have you?”

And then I realized that, yes, I knew this feeling. It was Ballet Bonk again. Evidently, BW is great at spotting Ballet Bonk.

So we stretched, and I asked BW to snap some pix for this month’s Suspend Challenge. 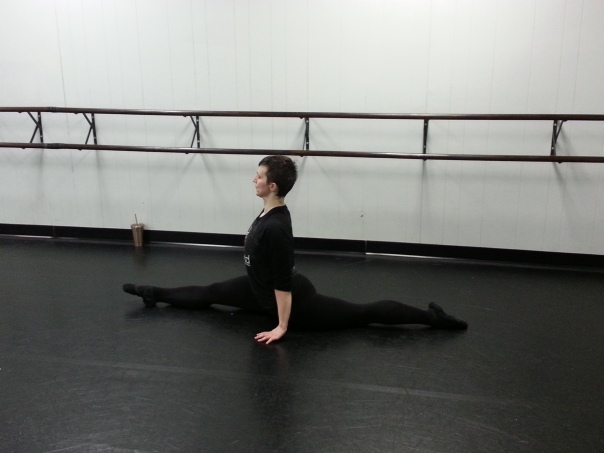 My feet were seriously unwilling to point at this, um, point. Also, my legs aren’t fully extended. 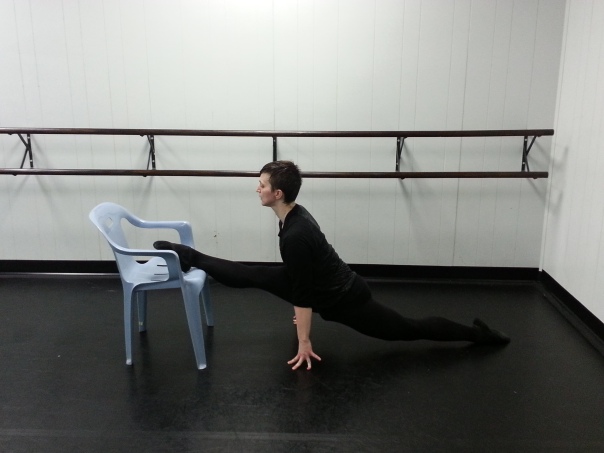 I was having trouble balancing this, and kept letting my left knee bend ever-so-slightly as a result. T-Rex problems.

This one is unintentionally creepy. On the other hand (heh), my butt looks AMAZING.

This is what we were going for, because I’m goofy: should we call this grand jeté a terre?

Pancake time, but it could just as easily be naptime. I was like, “This isn’t even really a stretch?” and BW was like, “You crazy flexible hips person!”

Posted on 2017/05/05, in balllet, class notes, it is a silly place, life, meds, mistakes and tagged ballet bonque, Challenges, mistakes were made, oversplits, splits, the parade. Bookmark the permalink. Leave a comment.